skip to main | skip to sidebar

This is an excerpt from The Deep Water Leaf Society: Harnessing the Transformative Power of Grief (copyright 2008, Claire M. Perkins. All Rights Reserved.) The book tells the story of my journey through grief into healing after the death of my son in 2004. Cameron overdosed while serving a short sentence in the county jail for parole violation. He was 26 years old and had been struggling with addiction for several years.

Dreams, art and journaling played a significant role in my healing, and I share a bit of my process here in the hope that these techniques might help someone else work through their own grief.

Five days before Cameron died, while I thought him to be safe and sound, cooling his heels in the county jail, I had a dream that grabbed me and would not let me go. The dream experience settled into my heart, leaving it heavy with foreboding. The dream was a simple vignette, yet it shook me deeply. And it carried a mystery I felt compelled to understand.

April 28, 2004 - The Big Wave
I am watching a huge wave break. The water comes all the way up into city streets. In a room, a small boy has peed himself. I think he must have seen or heard the wave crash and been frightened. He is holding a small fish in a baggie of water. There's a tiny eyeball floating in the water, too. I believe it is food for the fish.
I awoke from this dream knowing it carried a profoundly important message for me. It was an odd sort of dream in that it was very visually oriented, like I was looking at a snapshot of a scene. There was not much action, just a sense of the overwhelming power of the wave and the vulnerability of the little boy. I had a vague notion it might have something to do with Cameron and it left me feeling uneasy.

I was quite taken with the process of collaging from magazine photos, words and phrases. This dream, so visual in nature, seemed a natural fit for collage. I was anxious to dive into my magazine stash and see how the dream story might evolve through the medium of collage.

I began the collage early on the following Friday evening, April 30, 2004. I became completely engrossed in the process of selecting images, many of which seemed to be selecting me as I was not sure what they had to do with the dream story or how they would fit in. While most of the collage work I had done to date had been heavy on words and phrases, this one, like the dream, was nearly exclusively image-based.

I worked on the collage non-stop until about three in the morning when I glued the last of the pictures down. I was intrigued by the result as there was much more to it than there had been in the dream itself. It was as if the collage had grown organically from the seed of the dream, as if I’d continued dreaming in the creation of the collage.

The Big Wave (excerpt from The Deep Water Leaf Society) by ArtfulAlchemist on Polyvore.com

Many kinds of water images filled the collage: skyscraper buildings superimposed over images of turbulent waves; dark, stormy, violent waters; placid still water reflecting the setting sun; a huge aquarium; a speckled trout drifting in a still green pond. There were also several images of children: a baby being washed in a galvanized tub on some Third World city street; a little girl peering around a Christmas tree, eyes filled with wonder; two little dark-haired, dark-eyed boys vaguely reminiscent of Cameron in his youth. Two women, likely representing aspects of myself, sat at the bottom right as if contemplating or experiencing the scenes above. In the top left corner, there was a surfer riding the waves and that image puzzled me the most as the action and vitality of it seemed out of place in the otherwise moody and somnolent feeling of the overall piece.

I was anxious to try a form of journaling dialogue in which I would be able to talk with the collage images and learn their secrets. But it was too late to begin. I went to bed more curious than ever about the message of the dream.

A busy weekend went by. I had no time to attempt the dialogue process. Then came that fateful Monday morning, May 3, 2004, when the jail death detectives came to my door to tell me Cameron was dead.

A few days later Mary, a dear friend of mine who has since joined Cameron on the other side, came by to offer her condolences and a home cooked meal. She noticed the collage, which I’d propped on a bookcase in my home office, and she asked me about it. I told her about the dream and the obsession I’d had to collage it. I told her that now I could see it had been a premonition, that I had seen the wave that would finally swallow my son.

Mary told me that as she had meditated that morning she had gone looking for Cameron and she had met with him.

She said to him, “Cameron, I’m worried about your mom and dad. This has been a life altering event for them.”

He reportedly replied with a grin, in true Cameron style, “Yeah, it’s been a bit life altering for me, too!” I knew she’d had a true conversation with him, because that was exactly the kind of thing he’d say, and she didn’t know him well enough to know that.

to be continued in future posts . . .

As always, I welcome your comments here or by email (Claire@DeepWaterLeafSociety.com) 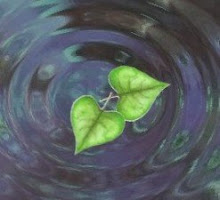 Exploring the Depths of Life, Death and Beyond. . .

Claire, Deep Water Leaf Society
Grief Coach, Dreamworker, Certified CJEA Instructor. After losing my eldest son to substance abuse in 2004, I embarked on a journey of healing and awakening that completely changed my life. I know today that love never dies and those we love are always and forever just a dream away.